The upward trend in Netanyahu’s bloc continued this week, as the predictable effects of the collapse of the Joint List, a largely Arab alliance, were felt.

That bloc — Likud and other parties allied with opposition leader Benjamin Netanyahu — picked up 1.2 seats in our average for the week, rising to 60.6 seats, the biggest weekly change since the campaign began.

Continuing from last week’s article on the influence of various polling companies, it should be noted that of the nine polls conducted this week, Netanyahu’s bloc scored 61 or higher in only three of them – two from Direct Polls.

In seven surveys by other companies, the block averaged 60.1, only once reaching 61.

In light of this trend, we will use this article to analyze the state of the election from the perspective of Prime Minister Yair Lapid.

We’ll look at the reasoning behind his hotly debated speech to the UN General Assembly on Thursday, how he might look to finish his campaign, and most importantly, the key dilemma he faces that could determine the election. 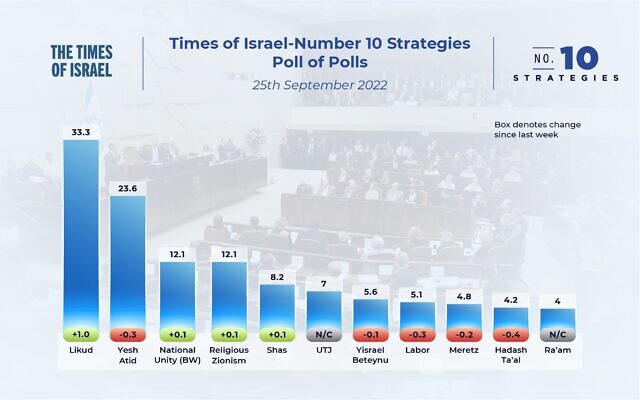 State of Israel’s election campaign: Poll poll, September 25, 2022, showing the number of seats the parties would be expected to win if elections were held today, based on weightings of the latest opinion polls.

Although Lapid is not the only potential prime ministerial candidate among the anti-Netanyahu parties, he is the undisputed leader of the “anti-Bibi” bloc.

The bloc itself is extremely ideologically diverse, stretching from Meretz on the left to Gideon Saar’s faction of the National Unity Party on the center right. It is even more diverse if you include the Arab Ra’am party and even Hadash-Ta’al, but for the purposes of this article we will focus on the Zionist parties in the bloc.

In the past five cycles, the block of those parties has hovered around the 50-mandate mark, and currently averages 51.2, which is right in the middle of where it has been for the past few years. It is worth noting, however, that with the number of seats for Arab parties currently at an all-time low (8.2 as things stand, as opposed to 10, 15 and 13 in the last three elections), one might have expected that the anti-Bibi block will be a bit more, because there is more room for the remaining parties. 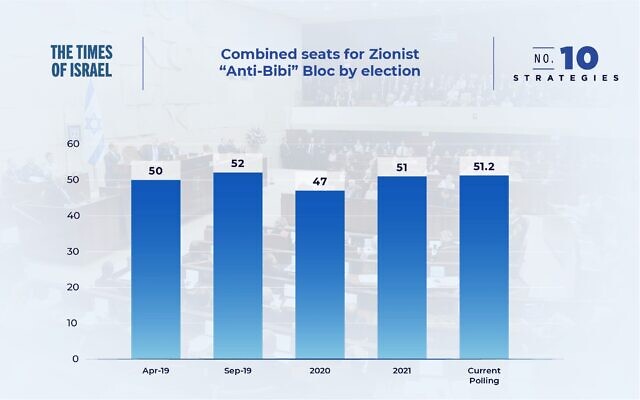 Combined seats for the Zionist bloc “Anti-Bibi” in the elections

Still, the main takeaway from these figures is that the anti-Bibi bloc is unlikely to grow much beyond its current 51.2 seats, meaning that if Lapid’s Yesh Atid wants to increase its share, it will likely have to come at the expense of others parties within the bloc.

From unipolar to multipolar block – and back?

Although the overall vote share of the anti-Bibi bloc has remained fairly consistent over the past five cycles, its structural composition has changed significantly.

In the first three recent election cycles, in 2019 and 2020, the bloc was dominated by one large party (the blue-white alliance led by Benny Gantz and Lapid) controlling about two-thirds of the bloc, with two or three significantly smaller parties effectively playing a role “satellite”. 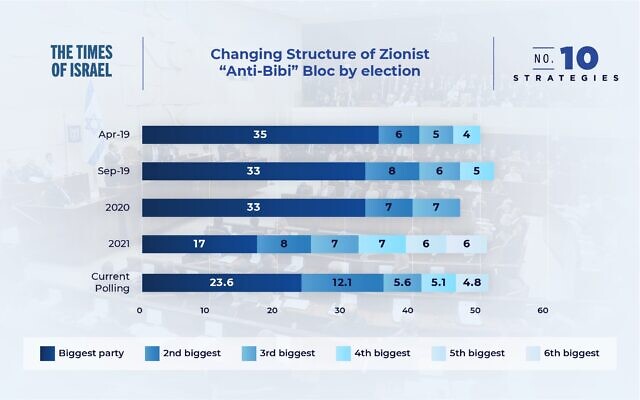 The breakup of the Blue and Whites in 2020 changed this dynamic. In the 2021 elections, Lapid’s Yesh Atid “inherited” about 50% of the party (17 seats out of the previous 33), but Gantz’s Blue and White won only eight. The remaining eight seats migrated to a record four smaller parties in the bloc. Yesh Atid was clearly the largest party in the bloc, but only controlled one-third of the bloc’s 51 seats.

This was not due to failure on Lapid’s part. In fact, he ran an extremely disciplined and strategically smart campaign. Aware of being a divisive figure (much more so than Gantz), he calculated that the best way to grow the bloc was not to go after former blue-white voters directly, but to allow them to move freely to any of the smaller parties in the bloc. in which they felt most comfortable. Indeed, this strategic savvy laid the foundations for the formation of the Bennett-Lapid government.

What now for Lapid?

The question is, however, what does it mean for Lapid today? As the current prime minister, keeping a hidden profile and working exclusively for the betterment of the bloc as a whole is no longer an option.

In order to improve his own position, he will want to significantly reduce the gap with Likud. Equally – if not more importantly – he would hope to widen the gap between Yesh Atid and Gantz’s National Unity Party, to ensure that he is the bloc’s sole prime ministerial candidate.

Ultimately, he would like to replicate the bloc’s unipolar structure, pushing Yesh Atid towards 30 seats. The question is how? 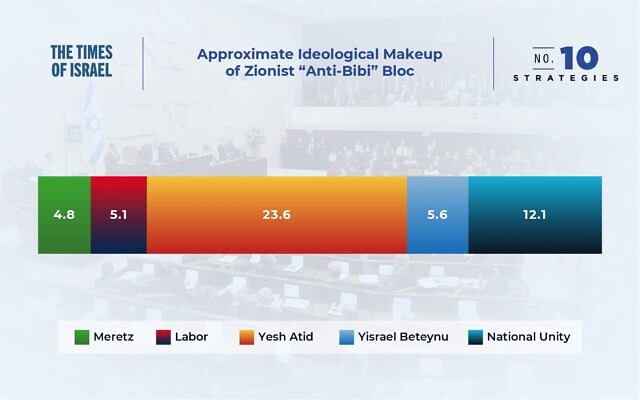 Looking to the left, Lapid sees about 10 seats, of which at least two to three should be up for grabs. Starting with Tzipi Livni in 2009, the leaders of the center-left bloc were mostly able to draw votes from the left by positioning themselves as the only alternative prime minister to Netanyahu.

The problem for Lapid is that neither Labor nor Meretz get much above the electoral threshold of 3.25%. Therefore, an aggressive campaign aimed at more centrist Labor voters (a natural target) could end up pushing Labor below the threshold. This is precisely why he was so keen to merge Labor and Meretz, as it would give him the freedom to compete with them for votes without risk. Their failure to do so limits his options. 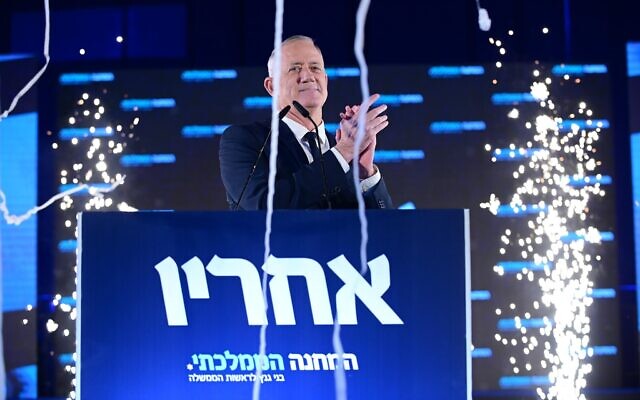 To the right of Yesh Atid, the situation is slightly different, but just as challenging. The problem here is that voters on the right of his bloc, according to the data, traditionally like him less than Defense Minister Gantz. And while he would like to weaken Gantz, he will have to be very careful in competing with him for these voters – who are naturally more inclined to a more centre-right message. Furthermore, in competing for them, he risks losing some of his left-leaning voters to Labour.

Lapid’s predicament with Yisrael Beyten voters is similar to that of Labor voters. While most of Avigdor Lieberman’s (elderly, Russian-speaking) voters are quite loyal to him, Lapid could definitely compete on the fringes, especially on issues of religion and the state. However, as with Labor, the risk of driving Yisrael Beytenu below the threshold far outweighs any potential benefit.

All this means that when Lapid surveys the political landscape, he sees many challenges and not too many solutions.

Ideally, of course, he would take one seat from every other party in the bloc – enough to increase his vote, but not so much as to push them below the polls. But the policy is imprecise and often has unintended consequences. Even a subtle, calculated approach to Labor or Yisrael Beytenu voters could be too effective, with disastrous results.

So, in the end, the logical best path for Lapid seems to be mobilization, not persuasion.

In practice, this means that instead of trying to convince voters on Yesh Atid’s immediate right or left to defect to his party, Lapid would seek to increase turnout among those who think and act like his existing supporters but are currently apathetic or unmotivated to vote.

Accordingly, we should expect major GOTV (get out the vote) campaigns aimed at achieving a diverse turnout in areas such as Hod Hasharon, Herzliya, Kfar Saba and Givatayim, all of which voted between 26 and 30 percent for Yesh Atid 2021, but where about one third of eligible voters did not vote. Such a strategy also plays to Yesh Atid’s strength, namely a traditionally well-run, and perhaps even unparalleled, operation on the ground.

This approach, we believe, helps explain much of the political reasoning behind Lapid’s mention of a two-state solution and a Palestinian state in his speech to the UN General Assembly on Thursday. (And there were, no doubt, ideological and diplomatic reasons for this – but for the purposes of this column we must focus on politics.) 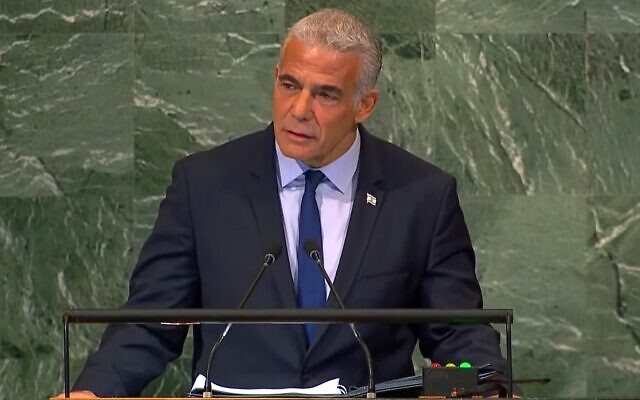 While Lapid’s focus on a two-state vision has generally been seen as a move to the left and an attempt to “cannibalize” Labor and Meretz voters, this seems an extremely risky strategy given the aforementioned proximity of those parties to the census.

It seems unlikely that a candidate so strategically sound in the last election would adopt such a dangerous approach this time as to risk handing Netanyahu the election on a platter. 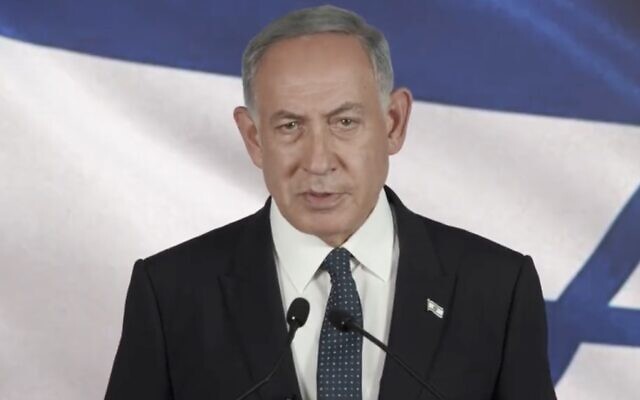 Opposition leader Benjamin Netanyahu criticizes Prime Minister Yair Lapid for supporting a two-state solution at the UN General Assembly, in a video statement released on September 22, 2022. (Twitter screenshot, used in accordance with clause 27a of the Copyright Act)

We would therefore see Lapid’s high-profile mention of the two-state solution as part of this mobilization strategy — an attempt to increase both enthusiasm and hope within the bloc, leading to increased voter turnout.

In short, it signifies an attempt to give vacillating centrists or disenfranchised centrists (or those who should be centrists) a reason to vote. 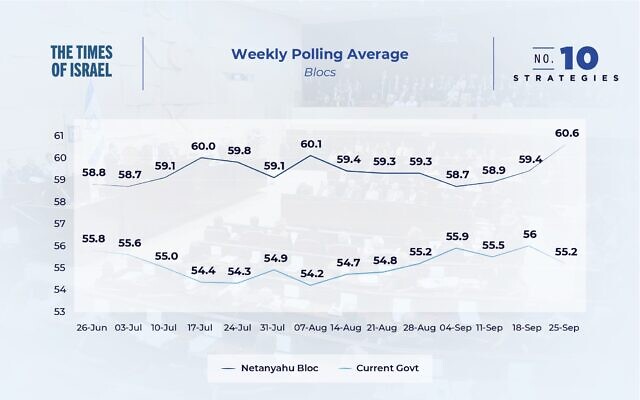 Whether that will be enough to make a difference is debatable.

Getting non-voters to the polls is easier said than done – especially after four elections in quick succession. And the risks of cannibalizing Labor (and to a lesser extent, Meretz) voters, and thereby pushing them below the threshold, are very real.

But with very little strategic room for maneuver, Lapid seems to see this as his best bet.

* Full disclosure: The authors of this text recently conducted a survey on behalf of Meretz.

Simon Davies and Joshua Hantman are partners at Number 10 Strategies, an international strategy, research and communications consultancy, who have polled and run campaigns for presidents, prime ministers, political parties and major corporations in dozens of countries on four continents.

A motorcyclist died late Thursday after colliding with a car at a major West Bank intersection. The Magen...