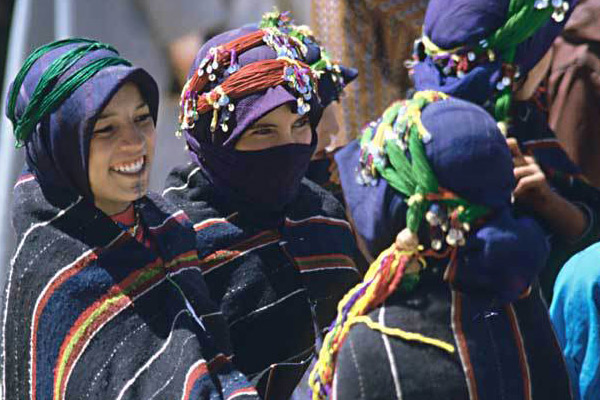 For centuries, Morocco has been home to a wide range of cultures and different groups of people. It is therefore natural for the Moroccan people to reflect this diversity in their customs, traditions and lifestyles.

The layered history of colonization, military conquests, and immigration has created an intricate Moroccan mosaic of cultures, languages, ethnic groups, and religions.

This heterogeneity extends to the geography of the region, with rich coasts, mountains, valleys, forests, rivers and the Sahara Desert. Morocco has established itself as a crossroads of civilizations that for hundreds or even thousands of years have managed to leave a mark in the cultural landscape of the kingdom.

Today the country has a population of 36.7 million, 4 languages, 9 World Heritage sites and 3 religions – Islam as the predominant, along with a Christian and Jewish minority. Here is a general overview of the Moroccan people and culture.

There are two main ethnic groups in Morocco Arabs i Barbers. The Arabs arrived as early as the late 8th century and conquered most of the coastal area. They founded dynasties in Morocco and together with the Moroccan Berbers extended their control to what is now southern Spain and Portugal.

There was a lot of mixing between the locals and the Arabs, and there were a lot of them today Moroccan people they claim to be of mixed nationalities, and only some identify as pure Arabs. Over time, Arabic became the primary language, but the most significant import of Arabs was Islam, which he shaped Moroccan culture.

Morocco had a significant Jewish population in the past, but many migrated to Israel and other countries. Only a few thousand Jewish Moroccans still live in the country.

Morocco is also home to several hundred thousand Christians, mostly of European descent. You’ll see mosques in every neighborhood, and a handful of churches and synagogues in larger cities.

People mostly associate North Africa with Arab culture, as Arabic is the official language and most Moroccans follow Islam. However, Berber culture remains a very strong and perhaps in many ways primary influence on Moroccan culture. Most of the names of cities and regions, some family names, styles of art, crafts and clothing, many beliefs about individual freedom and liberty, and a lot of Moroccan cuisine come from Berber culture.

As the Arabs focused their conquests on coastal areas, certain parts of the interior were less affected and retained a stronger sense of indigenous identity. As you travel through Morocco, you may notice that rural mountainous and desert regions are more clearly Berber than other parts of Morocco.

Moroccan Berbers are an ethnic group with a history of as much as 4,000 years. The Berbers were millennia before the arrival of the Arabs, Romans, French and Spaniards in Morocco! As much as 30% of Morocco’s population is purely Berber heritage, and the vast majority of the remaining 70% have at least Berber origins.

There are many Berber groups in Morocco with different languages ​​and customs, including the Drava in the Draa Valley, Shilhu in the Atlas Mountains and the Sous Valley, Riffia in the Rif Mountains and Sanhaya in the Middle Atlas and the Sahara.

However, all groups use the general name Amazigh, meaning free people, to denote their identity as indigenous Moroccans. These groups have different (though sometimes related) languages, clothing styles, and customs. Some of these differences stem from a variety of environments they call home, including the high Atlas Mountains, milder valleys, and hot, dry Sahara.

Berber languages ​​are mostly spoken languages, although there is a Berber alphabet that was developed thousands of years ago and is still used. Over 8 million Moroccans speak Berber as their primary language, and a deepened sense of pride in its history has resulted in the broadcasting of TV programs and schools that offer classes in those languages.

Most Berbers who still speak the language and maintain a cleaner Berber culture live in rural areas such as the Atlas Mountains or the Moroccan Sahara. Moroccans living in larger cities and coastal regions typically include a mixture of Berber, Arab, and Western influences.

While the Arabs and Berbers are the two main ethnic groups, the last centuries have brought people of many nations to Morocco. Both France and Spain colonized parts of the country, leaving lasting influences on language, architecture, education systems, law, art, and cuisine.

Although Morocco gained full independence in 1956, the local Arabic dialect is full of French and Spanish words. French is an important official language, and Iberian dishes are popular in restaurants and cafes. This influence is perhaps most striking in Tangier, which has been a cosmopolitan city for centuries.

Morocco is also increasingly a destination for Africans from other countries looking for better economic opportunities. Immigrants from Senegal and Cameroon are settling in northern Morocco, either permanently or on their way to Europe, bringing with them new customs and vivid styles of art, music and dance.

Morocco is a country with a great history of customs and traditions. The country is world famous for its incredible hospitality and impressive blend of cultures and religions. It is also a land of extraordinary contrasts and extraordinary diversity.

What could be more significant to the Moroccan people, customs and cultural heritage than a traditional Moroccan wedding? Moroccan weddings are a complex thing that celebrates unity, love, happiness and prosperity. It is a vivid celebration of holiness and virtue that engages all five senses, through colors, music, clothing and food.

Moroccan cuisine is world-famous for its intense and varied flavors, colorful blends and artistic presentation, so naturally when it comes to weddings the food is so much tastier and more exceptional.

Organizing an unforgettable feast includes sumptuous displays of splendor and sophisticated taste, and this translates into clothing. People wear their most luxurious and extravagant dresses, with exquisite pearl caftans and fascinating takshitas with sequins in vivid colors.

In addition to weddings, the variety of traditional Moroccan clothing is specific to any occasion, depending on how casual or formal it is. Djellabas are the most relaxed form of traditional clothing, you can find people who do sports while running errands or visiting family and friends. While kaftans and jabadori can be worn for religious holidays or engagement parties, such are reserved for a more formal environment.

With centuries of trade, conquest, and immigration, the habits of preparing and consuming Moroccan food have often taken shape and reshaped. The region is proud of its culinary scene with its exceptional flavors and tempting aromas. Geographical diversity and climate greatly allow the cultivation of an impressive range of foods and ingredients.

Due to its strategic position, Morocco has been part of the spice trade route in the past. This marked a truly definite period in the history of North Africa, and especially Morocco. It has also helped expand the country’s culinary range by incorporating new ingredients, herbs and spices that have now become essential in Moroccan cuisine.

The rich history of Morocco, from the indigenous Berbers to the nomadic Arabs, Phoenicians and Romans, is imitated in gastronomy. Moroccan people may differ in ethnicity, religious beliefs, or political affiliation, but they share a passionate appreciation for food and cooking.

Understanding food culture is a great way to see how people from different regions come together, exchange ideas and contribute to the creation of new dishes, dishes and cooking traditions. Tajine, couscous, Pastilla and Harira are a testament to regional influences combined with an ancient cooking tradition.

Many of Morocco’s main dishes, lamb secrets with dried apricots or couscous with caramelized onions and raisins, for example, consist of mixing sweet and savory flavors together, a tradition that dates back to ancient Roman cuisine.

When you try to analyze the history of any traditional Moroccan dish, you will find hints of Sicilian, Maltese, Greek and Arabic influence.

Therefore, it is a bit challenging to determine what belongs to whom. Regardless of whether it is street food, a sumptuous restaurant or a home-cooked meal, you can expect delicious dishes full of flavors and panachea that will inevitably make you fall in love with the region and its cuisine.

The multiethnic background of Moroccan culture could not be more evident than in the musical landscape and dance forms of the country. Despite the great influence of the Western music scene on contemporary Moroccan artists, there has been a desire lately for more traditional and authentic Moroccan music.

That longing to revisit one’s history is contained in the revival of the music of Gnaou, Berber, Rai and Andalusia through annual concerts and festivals dedicated to these ethnic genres.

Many young musicians and artists have also contributed to this revival by performing arrangements of traditional songs using modern blended rhythms and instruments to appeal to young people.

Like many customs and traditions, Moroccan music also varies depending on the geographical location of each region. Andalusian music, a mixture of Spanish and Arabic influences, dates back to the 9th century. It is considered to be the classical music of Morocco and is generally played on special occasions and national celebrations like Eid.

Chaabi music is the equivalent of pop, it is very lively and energetic and is usually played at weddings, baptisms and parties to encourage people to dance and have fun. Berber music is extremely ritual, requiring its own ceremony with intricate dance choreographies that exude a creepy, almost supernatural atmosphere.

On the other hand, Gnaou’s music is a mixture of sub-Saharan / African, Berber and Arabic music. Gnaoua musicians rely heavily on drums and castanets. It is a darkly mystical genre with African lyrics that has recently been mixed with notes of jazz and blues.

One of the most popular Gnaoua festivals is the annual one held in Essaouira (west of Marrakech) where Gnaoua fans as well as local and foreign artists gather to share their love and passion for this musical genre.

Soldier, 18, who walked alongside Queen’s coffin at funeral found dead

The price of gasoline is on the cards for next week, but diesel could be increased

The voting period for the 2022 elections is unified, without taking into account the differences in time...
Mexico News

Soldier, 18, who walked alongside Queen’s coffin at funeral found dead

An 18-year-old soldier who accompanied the Queen's coffin on her final journey has been found dead at...