What do you know about the first historical monument from Iran that is registered in UNESCO? Iran is one of the oldest civilizations in the world, ruled by many rulers and kingdoms. Today we can see historic buildings and religious temples from different periods in Iran. Religious buildings have always been a great attraction for tourists. Here we will present a Ziggurat named Chogha Zanbil which is a magnificent monument of the past.

Chogha Znabil Ziggurat is located in Susa, Khuzestan Province, 115 km from Ahvaz. Historically, the construction of this building dates back to 1250 BC. After entering the city, you can follow the signs on the way to Ziggurat ChoghaZanbil and visit it. But what are Ziggurats? Ziggurats were respectable and sacred objects of the people of that time, and they prepared the best materials, including bricks and clay, for the construction of such buildings.
How old is Chogha Zanbil? A look at its history indicates that it was built during the time of Ontash Napirash, King of the Elamites. The discovery of construction is also an interesting story. At that time, a geologist named Jacques Demorgan started drilling oil around Suza, but after a while he found ancient bricks and sent them to archaeologists. Years later, archaeological excavations led to the discovery of Choghaznabil.

As we mentioned, Chogha Zanbil was once buried underground. That is why we observe it in the form of a hill. Pyramidal and stepped architecture is evident in the structure of Chogh Zanbil; It consists of several floors and has dozens of nested hallways and rooms. The area around the building is paved to provide a great view. In the northeastern, northwestern and southwestern parts of this building you can see circular platforms. There are sundials made to detect the seasons and seasons. The interior of the building is made of clay and the exterior wall of brick. Bricks are used to protect clay from erosion. They are all baked, and inscriptions are written on them. This place has three zones marked by fences, and visitors can enter the first. 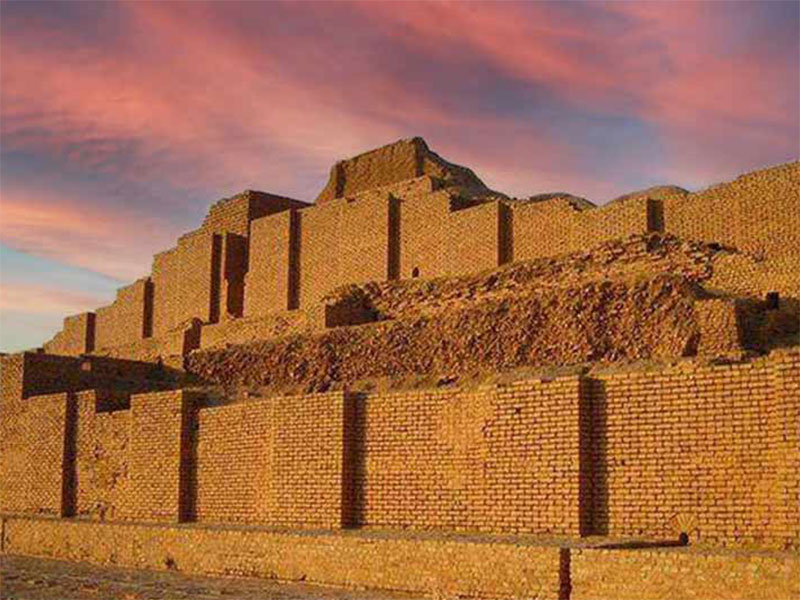 One of the wonders of Chogh Znabila is the aqueduct in this ancient temple. Waterways have been developed along the entire building to protect it from the heavy rains of Khuzestan. Also, the four corners of the Ziggurat are in the direction of the four geographical directions, which shows that the builders knew the north, south, east and west well.

There are stories and secrets behind every historical and religious place. It would be good to read the mysteries of Chogh Zanbil. The people of ancient Elam believed that the Ziggurats were a bridge that led people to heaven and brought them step by step closer to the gods. On the other hand, some assumed that the gods came to Earth from heaven with the help of the Ziggurat. That is why it is a building of stepped architecture.
In ancient times people believed in several gods. The people of ancient Elam accepted that many gods control and rule the world and that every city has a god in charge of its protection. People built temples for the gods in the center of the city. But inside the Ziggurat of Choghazanbil, statues of the gods Inshushinak and Napirish were kept. During the ceremony, people gave many gifts to the gods.
There are more interesting facts about this ziggurat. As we said, the terrain around the ziggurat is paved. Archaeologists have found traces of a child’s foot on some parts of the paving, the cause of which is still unknown. It’s scary and exciting at the same time! Evidence suggests that the ziggurat Choghaznabil seized and destroyed the Assyrian Banipal before it was completed. He stated in the inscription: “I broke the ziggurat of Suza, which was glazed with azure bricks. I leveled the temples of Elam to dust. I turned Drought into ruin. I destroyed the human voice and joy. “
Have you ever noticed the shape of a building? The ziggurat is square. Because the number four is considered sacred in numerical architecture. Four main directions, four seasons and four elements of nature are inspired.

You can visit Susa from the end of March to the end of April. In Chogha Zanbil Ziggurat you can travel by car or tour; since trains, buses, taxis do not pass through it. From October to April is the best time to visit the ziggurat. If you want to travel on a sunny day, it might be best to bring an umbrella with you. Wearing light sleeves will help you better withstand the heat. Think about the early days of the visit so the heat doesn’t bother you. We welcome any inquiries you have about traveling to Iran. Do not hesitate to contact us at info@idt.ir. You are also recommended to visit other places in Susa, such as the historic castle of Susa, the palace of Apadan and the shrine of Daniel the Prophet (PBUH).